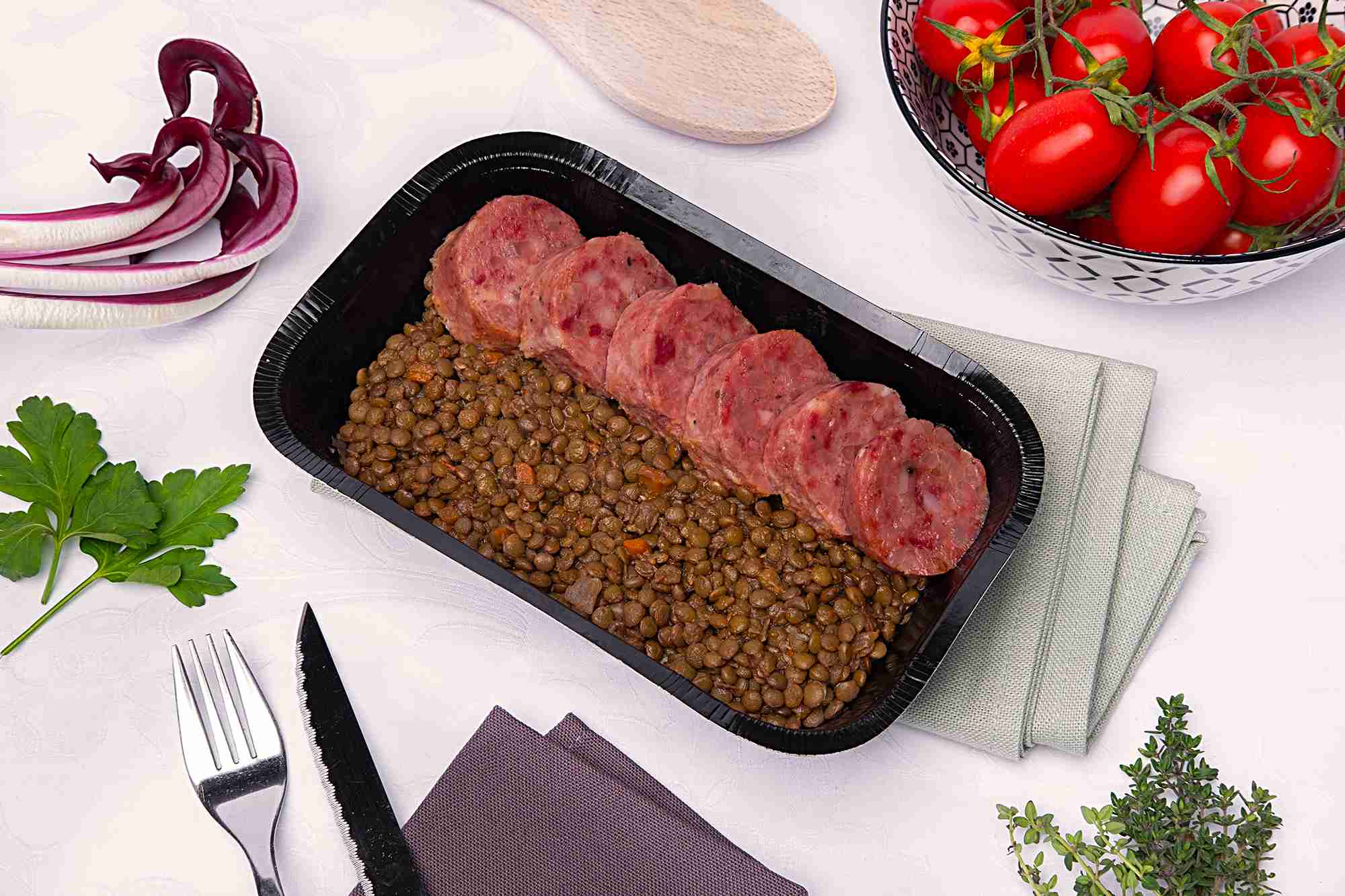 One of the most iconic winter dishes of traditional cooking from the Veneto region, but also from many other regions in northern Italy.

Cotechino with lentils is boiled in the traditional way, but in vacuum seal bags to guarantee that its aroma and cooking remain perfect. The portion of 400 g is packed in a modified atmosphere, so the consumer will find it very practical to heat, even in the microwave.

The product is already available, for the whole holiday period and until the end of January.

Contact our sales office at: export@gastronomiailceppo.com for information on costs and availability, or for a tailor-made offer.

The new website of Il Ceppo Gastronomia Italiana is online.
A digital space where you can get in touch with our company path, the philosophy of the supply chain, the production and more. You will be able to learn more about our company, raw materials, partners and the social commitment.

Il ceppo turns 50.
The party for our 50th year of business was a truly important occasion under many different points of view: it was the consecration of the dream of our parents, Osvaldo and Nadia, and of how well they “got it right” as far as we were concerned; it was the celebration of our family and of how satisfying and stimulating working together as a company with challenging goals is; it was the awareness of having built relations that last 50 years and which are still a source of stimulation and reciprocal esteem; it was a moment for thanking all those who have crossed our path (clients, suppliers and collaborators) and with whom we have shared successes, goals and history.

All clean and natural
Ever since the Viking age, Norwegians have dried fish outdoors in the fresh ocean wind to make stockfish. It is a specialty made almost exclusively in the North of Norway, and creating delicious stockfish requires the very best raw materials. Our stockfish comes mainly from the prime seasonal Arctic cod called skrei or the Norwegian Arctic cod, caught above the Arctic circle where the conditions are perfect for drying the fish.
To this day, we make it by using the same methods and the same special ingredient – our nature. From February to May, the fish hangs out by the sea, exposed to the elements of Northern Norway. With temperatures around 0°C and just the right balance of wind, sun and rain, the climate is perfect for drying fish. It is nature that turns this magnificent fish into the valuable, special and delicious stockfish.
The drying-method is thousands of years old, and it preserves the fish perfectly. This is exactly why stockfish was a sought-after commodity to bring along on ships as food for the sailors, which in turn made Norwegian stockfish a fish of the world.

The concentrated nutritional content of Norwegian stockfish makes its protein level the highest of any food. As much as 78,5 percent of stockfish is protein. In addition, the stockfish is loaded with vitamin D, B12 and iron. There is no overstatement in claiming the Norwegian stockfish to be one of the cleanest and healthiest fish there are.
Also, for those who are interested in food and enjoy discovering traditional ingredients in a modern light, the stockfish is perfect. Its characteristic taste and fine, firm texture make it a unique traditional product which deserves a place in today’s food culture.

No comments to show.